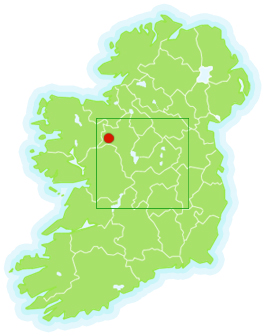 Drumalough Bog is a medium sized raised bog site situated in the north of Co. Roscommon. The site comprises three separate parts. This application involves the two western parts, both of which are good examples of western raised bog. Approximately 150 hectares of intact bog surface occurs within the site (Derwin et al., 2002) and within these area there are a number of extensive, interconnecting pool systems. This is particularly the case in the eastern section of the site where a very well-developed and extensive hummock/pool system occurs with all the diversity of species typical of the zonation from pool to hummock. The source of a well-developed flush with Molinia careulea and Myrica gale occurs in this part of the site also. The remainder of the raised bog vegetation has a typical flora of ling (Calluna vulgaris), single-flowered bog cotton (Eriophorum vaginatum), deergrass (Trichophorum cespitosum), cross-leaved heath (Erica tetralix) and various Sphagnum spp.

A significant portion of the SAC area (c. 13%) comprises conifer plantation on raised bog. These plantations lie immediately adjacent to the very wet raised bog areas and contain within them a remnant raised bog vegetation. There are, therefore, good prospects of bog restoration.

Drumalough Bog is a good example of a western raised bog habitat which has been selected for the presence of the Annex 1 habitats Active raised bog, Degraded raised bog (capable of regeneration) and Vegetation of depressions (Rhynchosporion). The habitat assessment presented in the Natura 2000 form gives a global rating of B (Good value) for active raised bog habitat within this site. Raised bog habitats are now very rare in Europe and it has recently been estimated that the Republic of Ireland contains 50% of the relatively intact oceanic raised bog systems in Europe (O’ Connell, 1998).

A large proportion of the raised bog resource in north Co. Roscommon, where this bog is situated, consists of cutover peat now utilised as grassland or forestry. Drumalough Bog is one of a small number of relatively intact bogs in the area and thus the site has considerable regional importance.