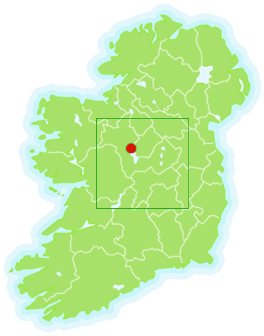 Lough Ree is a large SAC selected mainly for the large area of Natural Eutrophic lake habitat. The project site is part of a large western raised bog system which adjoins the north-western shore of the lake, in the townland of Kilteevan, Co. Roscommon. The project site is part of a relatively small area of raised bog dome which is somewhat hydrologically isolated, by forestry, from a larger bog area to the east. About 30% of the project site comprises some very wet active raised bog with a well-developed pool system on a portion of its area. Some of the pools may be ‘tension’ pools indicating a certain amount of shrinkage due to drying out. The pools show a good diversity of species including bogbean (Menyanthes trifoliata), white-beaked sedge (Rhyncospora alba), brown-beaked sedge (Rhynchospora fusca) and greater sundew (Drosera anglica) with a variety of Sphagnum species (including S. magellanicum). The presence of Atlantic liverwort Pleurozia purpurea and intermediate sundew (Drosera intermedia) indicates that the site is an example of a western raised bog. The remainder of the active raised bog has a good cover of ling heather (Calluna vulgaris) and single-flowered bog cotton (Eriophorum vaginatum) and other peatland species with a good under-storey of healthy Sphagnum spp. The vegetation shows signs of a good recovery after burning.

There is a small circular ‘flush’ in the centre of this area dominated by downy birch (Betula pubescens) and Scot’s pine (Pinus sylvestris) with bryophyte indicators of natural enrichment such as Aulacomnium palustre and also cranberry (Vaccinium oxyccocus). This can be considered to be a developing bog woodland. On three sides of the central bog dome there is Forestry plantation and the removal of these trees will improve the ecological connectivity of raised bog areas within the site generally.

This is a small raised bog dome, isolated from a much larger raised bog area, which supports good examples of the Annex 1 habitat active raised bog, degraded raided bog (capable of regeneration), bog woodland and vegetation of depressions (Rhynchosporion). Raised bog habitats are now very rare in Europe and it has recently been estimated that the Republic of Ireland contains 50% of the relatively intact oceanic raised bog systems in Europe (O’ Connell, 1998).

This bog contains the species of a typical western raised bog and is among the most easterly bog system of this type in Ireland. The main part of the larger bog contains the Annex 1 habitat bog woodland, and the Birch flush in this project area can be considered to be a developing bog woodland.