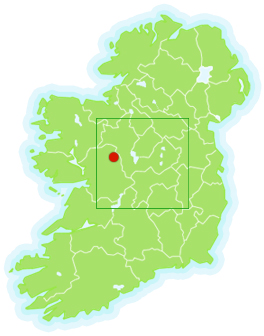 Curraghlehanagh bog is a medium-sized raised bog site with a high dome which is situated some 6 km north of Mountbellew village in the East of Co. Galway. There is approximately 150 hectares of uncut high bog within the site (Derwin et al., 2002) and for this reason, the site is selected as SAC for Active Raised Bog habitat. The surface of the bog is generally in good condition with a relatively large area of interconnecting pools present. These pool areas support species such as white-beaked sedge (Rhynchospora alba), long-leaved sundew (Drosera anglica), bog bean (Menyanthes trifoliata) and are generally dominated by floating carpets of the moss Sphagnum cuspidatum. The vegetation of the high bog supports the range of typical raised bog species such as ling (Calluna vulgaris), bog rosemary (Andromeda polifolia), single-flowered bog cotton (Eriophorum vaginatum), deer grass (Trichophorum cespitosum), cross-leaved heath (Erica tetralix) and bog asphodel (Narthecium ossifragum). In the east of the site there is a small area of wet woodland dominated by downy birch (Betula pubescens) and eared willow (Salix aurita) which has developed along an old drainage system.

The north-western margins of this site are dominated by conifer plantation of variable stand quality. Most of this plantation is on the edge of the high bog dome with a small area planted on cutover. In some parts of the plantation the trees have grown poorly and a modified raised bog flora still survives on the ground. Areas such as these will regenerate more rapidly after tree removal. Although much of the project area is afforested at present there is also an area of unplanted raised bog present and there are some drains in this area that will require damming.

Curraghlehanagh Bog is a good example of Raised Bog and is of national interest. The site has been selected for the presence of the Annex 1 habitats Active raised bog, Degraded raised bog (capable of regeneration) and Vegetation of depressions (Rhynchosporion). The habitat assessment presented in the Natura 2000 form gives a global rating of B (good value) for active raised bog habitat at this site. Raised bog habitats are now very rare in Europe and it has recently been estimated that the Republic of Ireland contains 50% of the relatively intact oceanic raised bog systems in Europe (O’ Connell, 1998).

This site lies within a few kilometres of two other raised bogs of high conservation value and this clustering of sites adds to the ecological value of the site.