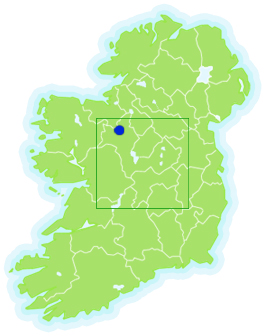 Cloonshanville Bog is a very important raised bog site located 1.5 km east of Frenchpark village, Co. Roscommon. In terms of habitats present the site is very diverse containing a substantial area of open intact bog, an extensive linear flush (colonised by wet bog woodland) and an area of calcareous fen. It has been estimated that there are approximately 152 hectares of high bog remaining within the site (Derwin et al., 2002). The vegetation of the intact high bog surface is largely dominated by ling (Calluna vulgaris), deer grass (Trichophorum cespitosum) and hare’s tail cottongrass (Eriophorum vaginatum). Other frequent species include cranberry (Vaccinium oxycoccus), cross-leaved heath (Erica tetralix), bog asphodel (Narthecium ossifragum) and common cottongrass (Eriophorum angustifolium). The site also supports a large population of Sphagnum pulchrum, a nationally rare species in the Republic of Ireland (Douglas, 1987). The area of bog woodland is approximately 14 hectares in size and is considered to be one of best examples of bog woodland habitat in the country. The low canopy of the woodland is dominated by downy birch (Betula pubescens) with species such as purple moor-grass (Molinia caerulea) and bog myrtle (Myrica gale) frequent underneath (Conaghan and Heery, 2003).

Approximately 35 hectares of conifer plantation lie within the SAC area and these occur as 3 distinct blocks. In one area conifers have been unsuccessfully planted in an area of calcareous fen which occupies the site of a former lake. In the north of the site a large section of conifers have grown very poorly on bog and a well-developed ground flora of bog species still exists (Conaghan and Heery, 2003). In addition to the afforested areas there are approximately 19ha of open bog within the project area and these areas will require some drain blocking.

Cloonshanville bog is an excellent example of a raised bog habitat which supports significant areas of the Annex 1 habitats active raised bog, bog woodland, degraded raised bog (capable of regeneration) and vegetation of depressions (Rhynchosporion). It should be noted that active raised bog and bog woodland are listed as priority habitats for conservation. Raised bog habitats are now very rare in Europe and it has recently been estimated that the Republic of Ireland contains 50% of the relatively intact oceanic raised bog systems in Europe (O’ Connell, 1998).

This site ranks as one of the most important in Ireland and is also one of the most ecologically diverse in the country. The bog woodland area is of particularly high ecological value, ranking as one of the top 10 sites in the country. The presence of calcareous fen vegetation is also of great ecological interest as calcareous fen is rarely found in close association with areas of ombrotrophic raised bog. The presence of a large population of the rare Sphagnum pulchrum also adds to the conservation value of the site. The occurrence of raised bog, bog woodland and calcareous fen habitats in close proximity at one site is a very interesting hydrological situation which requires further survey.