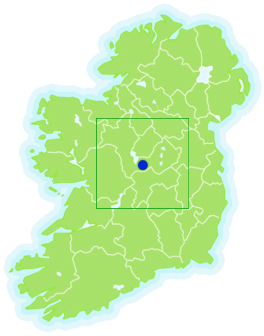 Carn Park bog is a medium sized raised bog site located 4 kilometres north-east of Athlone, Co. Westmeath. The site comprises a large area of rather uniform, open bog surrounded by extensive conifer plantations which have been planted on the dome and on surrounding cutover and mineral soil. It has been estimated that there are approximately 155 hectares of high bog remaining within the site (Derwin et al., 2002). The vegetation of the intact high bog surfaces tends to be dominated by ling (Calluna vulgaris) and hare’s tail cottongrass (Eriophorum vaginatum) with species such as cross-leaved heath (Erica tetralix), bog asphodel (Narthecium ossifragum), deer grass (Trichophorum cespitosum) and common cottongrass (Eriophorum angustifolium) also frequent. The site supports a large population of Sphagnum pulchrum, a nationally rare species in the Republic of Ireland (Douglas, 1987). In the south of the site the species grows in an area of partially drained bog which contains poorly grown conifer plantation. Well-developed wet pool areas are generally rare within this site. In the northern half of the site there is an area where the raised bog surrounds a linear ridge of mineral ground. This area has the potential to form a lagg area when the conifers are removed and drain blocking is carried out.

Approximately 100 hectares of plantation (mostly lodgepole pine) occur within this site with two particularly large blocks in the south. Conifers have also been planted on the low ridge of mineral soil and associated lagg in the north of the site. The project area also includes strips of intact bog owned by Coillte and these are separated by strips bog owned by private individuals.

Carn Park bog is a good example of a raised bog habitat which supports significant areas of the Annex 1 habitats Active raised bog, Degraded raised bog (capable of regeneration) and Vegetation of depressions (Rhynchosporion). It should be noted that active raised bog is listed as a priority habitat for conservation. The habitat assessment presented in the Natura 2000 form compiled for the site gives a global rating of B (good value) for active raised bog habitat. Raised bog habitats are now very rare in Europe and it has recently been estimated that the Republic of Ireland contains 50% of the relatively intact oceanic raised bog systems in Europe (O’ Connell, 1998).

Although a significant proportion of this site has been planted with conifers in the past, a large area of open bog still exists and this still remains of high ecological interest. The presence of a potential lagg area in the north of the site is of great interest as lagg areas are very rare features which have been noted from a small number, i.e. <10, of Irish raised bog sites. The presence of a large population of the rare Sphagnum pulchrum is of particular interest and adds to the conservation value of the site.