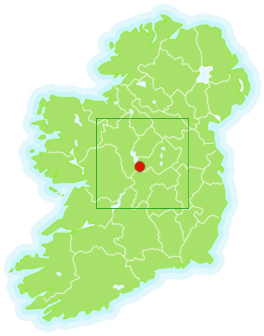 Crosswood bog is an important raised bog site located 3 km east of Athlone, Co. Westmeath. The site lies on the southern side of a disused railway track and comprises an extensive area of raised bog habitat. The site can be divided roughly into a largely intact northern two-thirds and a degraded southern third which is dominated by cutover bog, regenerating birch scrub/woodland and coniferous forestry. The vegetation of the intact high bog surfaces is dominated by species such as ling (Calluna vulgaris), cross-leaved heath (Erica tetralix), bog asphodel (Narthecium ossifragum), deer grass (Trichophorum cespitosum), hare’s tail cottongrass (Eriophorum vaginatum) and common cottongrass (Eriophorum angustifolium). The cover of Sphagnum moss is locally high and includes species such as Sphagnum capillifolium, S. papillosum and S. magellanicum. In addition, the site supports an important population of Sphagnum pulchrum, a nationally rare species in the Republic of Ireland (Douglas, 1987). The north-western corner of the site supports a network of well-developed pool areas on very soft and quaking peat.

The southern margins of this site are dominated by coniferous forestry most of which was planted in the late 1970’s. Cartographical evidence suggests that this forestry occupies an area which may have formed a natural lagg zone in the past.

In the south-eastern portions of the site there are substantial areas of regenerating birch scrub on cutover bog surfaces and these areas provide an important wildlife habitat even though it is the product of past disturbance, i.e. peat cutting.

Crosswood bog is a good example of a raised bog habitat which supports significant areas of the Annex 1 habitats Active raised bog, Degraded raised bog (capable of regeneration) and Vegetation of depressions (Rhynchosporion). The habitat assessment presented in the Natura 2000 form for this site gives a global rating of B (good value) for the active raised bog habitat present. Raised bog habitats are now very rare in Europe and it has recently been estimated that the Republic of Ireland contains 50% of the relatively intact oceanic raised bog systems in Europe (O’ Connell, 1998).

The bog is one of a number of important raised bog sites along the eastern shores of the river Shannon. The presence of a large population of the rare Sphagnum pulchrum is of particular interest and adds to the conservation value of the site.