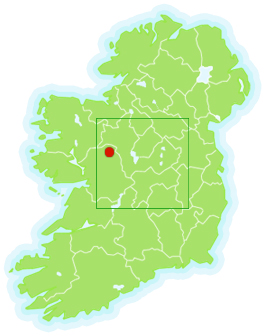 Lough Lurgeen Bog and Glenamaddy Turlough is a large site dominated by raised bog and turlough habitats. The site contains one of the largest areas of raised bog habitat in the country with approximately 580 hectares of uncut high bog present (Derwin et al., 2002). The surface of the bog is generally in good condition with little serious disturbance recently, apart from some limited peripheral cutting and afforestation. The vegetation of the high bog supports the typical range of raised bog species such as ling (Calluna vulgaris), bog rosemary (Andromeda polifolia), single-flowered bog cotton (Eriophorum vaginatum), deer grass (Trichophorum cespitosum), cross-leaved heath (Erica tetralix) and bog asphodel (Narthecium ossifragum). Sphagnum cover is locally high, especially in very wet areas of quaking peat where S. cuspidatum, S. papillosum and S. magellanicum are particularly frequent. One of the most noteworthy ecological features of the site is the presence of a large, peat-bottomed, oligotrophic lake in the middle of the raised bog area. This lake is supplied by oligotrophic water which percolates in from the surrounding bog. The water leaves the lake via a long and narrow outlet channel which flows to the north-west, eventually entering the turlough basin.

In the past few decades conifer planting has taken place along the site margins with most of this planting occurring along the eastern and northern edges. Although most of this planting has been on cutover bog, these plantations continue to exert impacts on the high bog, and there are a number of small areas of plantation on the high bog itself. The project area comprises an area of raised bog in which the conifer crop has been recently felled however drains still need to be blocked.

Lough Lurgeen Bog and Glenamaddy Turlough Bog contains very good examples of the Annex 1 habitats Active raised bog, Turlough (both priority habitats), Degraded raised bog (capable of regeneration) and Vegetation of depressions (Rhynchosporion). These habitats are considered to be among the best examples in Ireland due to their relatively large size and the generally low levels of disturbance. In the Natura form compiled for the site active raised bog was given a rating of A (Excellent value) which emphasises the importance of the site. Raised bog habitats are now very rare in Europe and it has recently been estimated that the Republic of Ireland contains 50% of the relatively intact oceanic raised bog systems in Europe (O’ Connell, 1998).

The site contains the second largest area of intact raised bog surface in Ireland. The combination of raised bog, oligotrophic lake and turlough habitats is unique in Ireland and thus the entire system is very important from both a hydrological and ecological perspective.