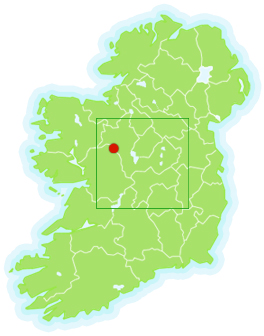 Kilsallagh bog is a small to medium-sized raised bog site located near the village of Glenamaddy in the east of Co. Galway. The site contains a reasonably large core of uncut raised bog - approximately 190 hectares in size – which is surrounded by cutover surface (Derwin et al., 2002). Typically the most prominent plant species on the intact bog surface are ling (Calluna vulgaris), deer grass (Trichophorum cespitosum), cross-leaved heath (Erica tetralix) and hare’s tail cotton-grass (Eriophorum vaginatum). Much of the intact bog surface also has a high cover of various Sphagnum mosses and lichens such as Cladonia portentosa and Cladonia uncialis. Although some extraction of peat still occurs within the cutover margins of the bog most of the uncut high bog area is in good condition with generally low levels of damage from grazing or fire.

A stand of lodgepole pine (c. 12 hectares), surrounded by intact raised bog, occurs in the north-western corner of the site. Although these trees are 25 years old, most have grown poorly, have not formed closed canopy and, as a result, there is still an intact raised bog flora present in places with a high cover of ling and Sphagnum. An important area of very wet, active raised bog lies just to the south-east of the planted area and this area contains numerous wet pools which are dominated by Sphagnum cuspidatum.

Kilsallagh bog is a nationally important raised bog. The site has been selected for the presence of the Annex 1 habitats Active raised bog, Degraded raised bog (capable of regeneration) and Vegetation of depressions (Rhynchosporion). The habitat assessment presented in the Natura 2000 form gives a global rating of B for active raised bog habitat at this site. Raised bog habitats are now very rare in Europe and it has recently been estimated that the Republic of Ireland contains 50% of the relatively intact oceanic raised bog systems in Europe (O’ Connell, 1998).