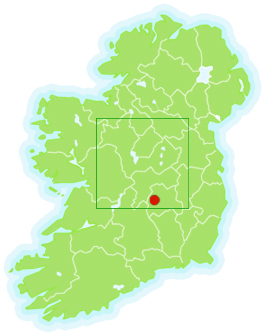 Coolrain Bog is a small midland-type raised bog situated to the south of the Slieve Bloom mountains in Co. Laois. The SAC area contains approximately 60ha of open, high bog surface (Derwin et al., 2002) and half of this area lies within the project area. It has a rather flat topography with little evidence of a former hummock/pool system. The vegetation is in good condition and consists of uniformly co-dominant ling heather (Calluna vulgaris) and single-flowered bog-cotton (Eriophorum vaginatum) with a good layer of healthy Sphagnum species including S. capillifolium and S. papillosum. A notable feature is the widespread occurrence of cranberry (Vaccinum oxyccocus) throughout the intact dome. The dome also contains two small circular ‘flushes’ on which downy birch (Betula pubescens), Scot’s pine (Pinus sylvestris), and even one Oak Quercus sp. grow along with an understorey of species indicating natural enrichment such as crowberry (Empetrum nigrum) and the moss Aulacomnium palustre.

The remainder of the project area consists of open forestry plantation mostly on previously cutover bog surface. Some of this forestry grades naturally down to the relatively undisturbed floodplain of the Tonet River. The areas forestry plantation which occur on cutover bog have limited prospects for restoration to ombrotrophic raised bog vegetation but the approprite management will restore it to a wet, semi-natural Birch woodland which will be of high ecological value.

A pair of Merlin, Birds Directive Annex 1 bird species (Falco columbarius) was present at the site in May 2003, almost certainly breeding. The presence of this important species will be taken into account during any management operations at this site.

Coolrain Bog is a small but good example of a Midland-type raised bog which supports significant examples of active raised bog and degraded raised bog (capable of regeneration). The habitat assessment presented in the Natura 2000 form compiled for the site gives a global rating of B (good value) for active raised bog habitat. Raised bog habitats are now very rare in Europe and it has recently been estimated that the Republic of Ireland contains 50% of the relatively intact oceanic raised bog systems in Europe (O’ Connell, 1998)..

This is one of very few SACs selected for active raised bog habitat south of the Slieve Bloom mountains (i.e. in the south part of NUTS 004 and further south in Ireland). Raised bog habitat was formerly more common in this area, however at present only a two isolated, relatively intact systems remain (Cross, 1990). Although not selected for the presence of the Annex 1 bird species Merlin Falco columbarius, its breeding presence here increases the site’s importance.