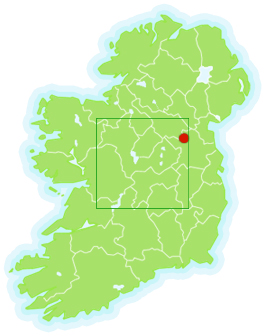 An area of coniferous forestry - c. 11 hectares in size - was planted along the north-western margins of the high bog surface in the late 1970’s. These conifers have now grown to a general height of between 6 and 8 metres and are contributing to the drying-out of the adjacent intact bog to the south.

Killyconny bog is a good example of a raised bog habitat which supports significant areas of the Annex 1 habitats Active raised bog, Degraded raised bog (capable of regeneration) and Vegetation of depressions (Rhynchosporion). The habitat assessment presented in the Natura 2000 form gives a global rating of B (good value) for active raised bog habitat at this site. Raised bog habitats are now very rare in Europe and it has recently been estimated that the Republic of Ireland contains 50% of the relatively intact oceanic raised bog systems in Europe (O’ Connell, 1998).

Though the site is rather small in terms of Irish raised bog systems this bog is especially important from a biogeographical point of view as it is the most north-easterly example of a relatively intact raised bog system in the Republic of Ireland. Areas of relatively intact raised bog were previously common in the north-east of the country however almost all of these have been lost to peat cutting over the last few centuries (Cross, 1990).