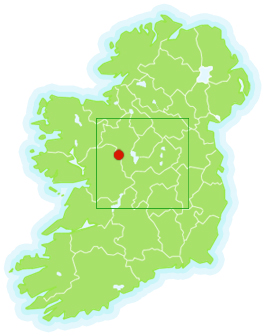 The site is also a proposed Natural Heritage Area – Camderry Bog (Site Code 281). Camderry bog is a medium-sized raised bog located in the east of Co. Galway. The site is a good example of a western raised bog and among the most frequent plant species of the intact high bog areas include ling (Calluna vulgaris), cross-leaved heath (Erica tetralix), hare’s tail cottongrass (Eriophorum vaginatum), common cottongrass (Eriophorum angustifolium), and various Sphagnum spp.. In the wetter, more central, areas of the site there are a number of pool areas. These pools are typically dominated by the moss Sphagnum cuspidatum with vascular plant species such as Eriophorum angustifolium and white-beaked sedge (Rhynchospora alba) also occurring occasionally. This wet central area supports some good examples of Rhynchosporion vegetation.

In common with all raised bog sites in Ireland most of the marginal areas of the site have been subject to peat cutting in the past and this has resulted in the drying out of the adjacent intact bog surface. An area of conifer forest (c. 15 hectares) has been planted on the western side of the northern bog lobe and this has resulted in the direct loss of raised bog vegetation and is also causing the drying out of adjacent intact bog to the north, east and south. In spite of this afforestation the peat on which this forestry occurs is still remarkably wet with a high Sphagnum cover still evident in many places.

Camderry bog is a good example of a raised bog habitat which has been selected for the presence of the Annex 1 habitats Active raised bog, Degraded raised bog (capable of regeneration) and Vegetation of depressions (Rhynchosporion). The habitat assessment presented in the Natura 2000 form for this site gives a global rating of B (good value) for the active raised bog habitat present. Raised bog habitats are now very rare in Europe and it has recently been estimated that the Republic of Ireland contains 50% of the relatively intact oceanic raised bog systems in Europe (O’ Connell, 1998).